For women and men?

For women and men?

Posted at h in NEWS by Merezas 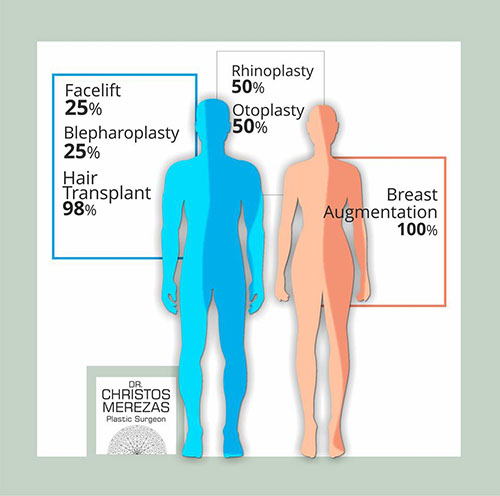 For women and men?
The continuous increase in the number of men who choose plastic surgery for the correction of aesthetic problems, shows that they no longer tolerate “angry” eyebrows, aged eyelids, or the “turkey neck”.
The percentage of men who ask me to perform a Facelift has increased to 25%. Those who ask Blepharoplasty already account for 33%.
Where there are no anatomical differences between the two sexes, the percentages are the same:
1. Otoplasty (for prominent ears) was always the same for the two sexes, 50% each.
2. Rhinoplasty (for the nose) is the same, 50% each
Where there are anatomical or functional differences, the percentages are different:
1. Hair transplant: 98% men, because the problem of baldness is almost exclusively for men.
2. Breast augmentation: 100% for women, because the problem of small breasts occurs exclusively in women.